Because apparently it wasn't enough to just work on the kinect. 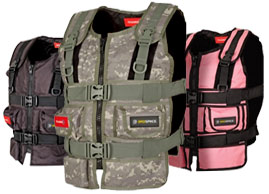 This is a USB controlled vest with 8 air cells in it, which can be used to cause quick haptic force via pneumatics. In other words, it's a vest that can simulate being shot, by way of making the user feel like a roll of bubble wrap. I've also heard it described as "being poked by gnomes. And not with their fingers." While I cannot vouch for the physical accuracy of that statement (yet), it does fit well with the mental images of the feeling.

As usual, I decided to reverse engineer it to write my own drivers, which will eventually turn into Max/Pd externals, and also another project that I'll be annoucing later this week.

This normally wouldn't be a problem, but this time around, much like the issues emokit had, the manufacturer encrypted the protocol, but distributed a free (pre-compiled, closed source) SDK. I ended up writing up the procedure for reversing out the protocol and building the library, since it's one of the more complicated procedures I've had to do to get new hardware working. I was thinking about posting the doc here, but it's rather long.

Anyways, it's now done and there's proof of concept python using pyusb in the repo. I'll be extending this to a C API as soon as possible, just to get it over with since there's not a ton of functionality to the vest.

To close, here's a video of my cat versus the vest (running my code!):