After 10 months of silence, it's time to get things moving on here again. First off, I've created a new website for all of my Max/MSP and PureData externals. After 5 years of creating externals and having people find them randomly, it seemed like a good time to start advertising them like an actual developer. 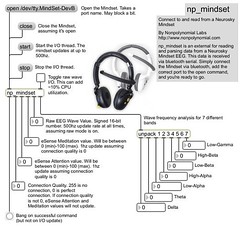 I've also been getting a few requests for my Neurosky external lately, which I never actually finished after the biometric presentation project last year. So, I've tightened it up, released one non-working version, and have now released one slightly less non-working (or more working) version! Version 1.1.5 should allow you to reliably pull data from the mindset using Max/MSP, though the CPU usage is still on the high side, and it still crashes horribly on PureData. There will be a version 1.2 release that addresses these issues soon, but this should work for the time being.