The week of getting half-done projects to 3/4th done continues. 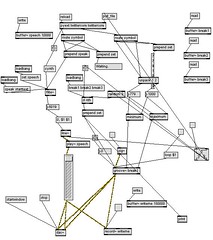 I created this back in September, when I was taking my Max/MSP classes at RobotSpeak. I decided to try layering twitter public timeline messages run through text-to-speech over fairly simple looped break samples, because noise + noise = noise.

Unfortunately, either Py/Ext or flite~ is causing Max/MSP to crash about 20-30 minutes in, regularly, so having a full time stream running is a bit of an issue right now. However, I made a small 2.5 minute track.

Have fun and be safe. Happy New Year to you too. xx

, do you ever get to see the wildlife?

Back from dinner. Answering a few emails then watching Helvetica.

Back in Columbus. Found 5 dead roaches in my apartment. Bleh.

no run. GB Hogg to SC Ganguly, no run, fuller and on the off, driven hard but straight to cover

no run. MG Johnson to SR Tendulkar, no run, full and outside the off, left alone, this one doesn't bounce too much and scoots along to t ...

Helpful Tip: Don't let your brother-in-law take you to "I Am Legend."

when am i coming by for pie again?

Went to Kohl's tonight... I don't even know why I bother with that place.

congratulations on your laptop!

is it just me or does firefox seem to get less and less stable with every patch?

"Arguments with furniture are rarely productive."

To be fair, it was actively gnawing on some guy's head when they shot it.