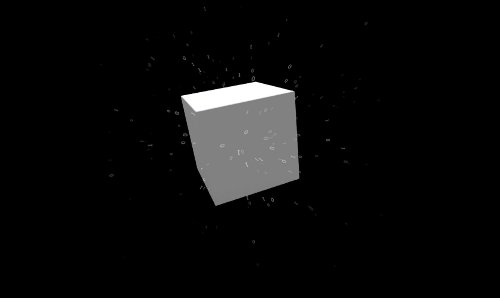 The One Time Cube Avatar was created during the internal development of voice communications for Second Life at Linden Lab. The goal was to make an avatar that used the voice stream as an extension of the avatar's aesthetic, versus just talking through it.

The idea behind the avatar is a cube trying to communicate with others via cryptography, specifically a one time pad. However, it forgot to give the other side of the pad to anyone it's talking to, so it's stuck outputting unintelligible noise.

The visual representation of the avatar is a simple white cube, with a particle system made up of a number texture that's going at all times. Text chat output is random streams of numbers, generated by a script while the controlling user is typing.

For the audio portion, samples were taken from the Conet Project number station recordings. These were fed into the Forester software by http://www.leafcutterjohn.com. Forester makes a 2D grid of sample portions, then walks them using a cursor that follows certain rules, while adding effects like delay and reverb randomly. Using soundflower, this audio stream was routed to the input of the Second Life client. The end output is layers of number stations, usually with heavy reverb. The numbers that the voices on the station are reading work together with the particle system visuals and text output to create the aesthetic.