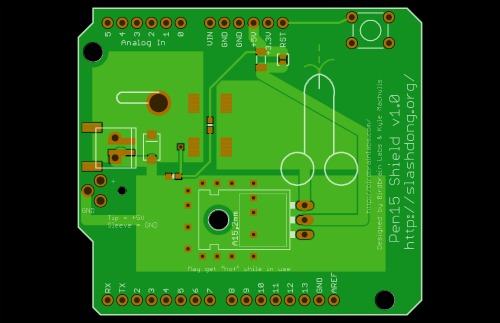 Arduino shield built specifically for controlling small vibrators via computers. The board only contains 5 components:

The board works as a simple, single direction motor driver, driven by the PWM pins on the arduino, and powered by the USB power supply. This allows the user to create control interfaces to vibrators using whatever language/interface they like, be it software or via hardware interfaces hooked into the other ports.

While there are other driver shields available for the arduino with more features, the pen15 was kept simple so the function of every part could be understood by someone with little to no prior electronics knowledge. This allows it to be used in introductory arduino/electronics workshops based around building a simple piece of sex technology.