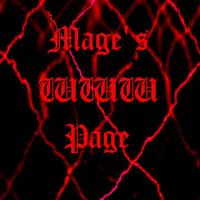 It all started on January 02, 1996. I found a small text file on how to make webpages, and had played with Paint Shop Pro (PSP) before. Since it was Christmas break and I had nothing better to do, I made a homepage. Using a Cure CD (Pornography, I think it was) to generate some images with Cthugha, I then pasted them into PSP and just wrote stuff over them in a "gothic" font. I did the same thing with the background, and all of the other 2 or 3 graphics I put on the page. Since I was into the whole gothy thing (i.e. I owned albums released on the Cleopatra label), I decided to make a little Gothic page. It contained a few pictures of myself and links to the bands I liked.