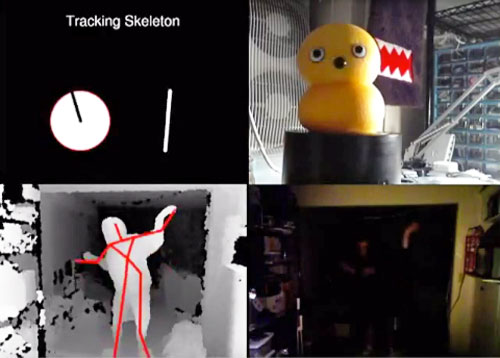 Reverse engineered a MyKeepon robot toy. Tapped the i2c bus to map commands, then wrote an Arduino based firmware KeepOff to control the bot via USB.

Kinect control was a rapid prototyping project to make an interesting demo for the KeepOff MyKeepon Reverse Engineering project.

The goth dance is a running joke from the Art and Code conference at CMU, held October 2011. For those not familiar with the youtube meme, see

BeatBots, the company behind the MyKeepon, took the KeepOff code and improved upon it to create the MyKeepon Library, which is now the standard library for Keepon control.