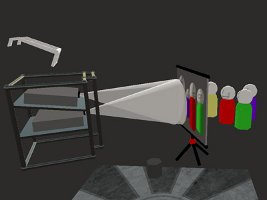 Second Life (SL) is an amazing virtual world, capable of letting its users produce beautiful, gigantic 3D structures. However, most users are stuck with a 2D screen to view these on, making them lose their depth and grandeur. The EyeSore project (So named for the headaches it can cause when the system falls out of sync, not to mention the fact that there is a large portion of builds in SL that could easily be described as such) allows a user to navigate through the world using the view points of two avatars, combined using a polarized projection system onto a metalic reflective screen. Through the use of polarized glasses and the vision capabilities of the human brain, the images produced by the two viewpoints of the avatars are combined to create a 3D picture.

The system for this project was originally built for the Copernicus Rover Mission at Amboy Crater in May of 2004. It was used as a Lunar Rover view simulator for study of user interface and driver fatigue conditions for space missions.